Most explosion and fire accidents in lithium-ion battery products occur while charging, even inside electric vehicles, power tools, electronic products, you name it. This mainly happens when the negative electrode material (graphite or mixed silicon) inflates while charging, which shortens the distance between the positive and negative electrodes. If the mixing of conductive impurities causes the effective distance between the electrodes to become shorter than the expected design, it will easily evolve into an internal short circuit. And this inflated phenomenon will continue to expand during the cycle of repeated charging and discharging, and does not settle after a single charge! (Refer to the research report in Figure 1). Such accidents may occur during the non-initial charging in battery production or in the end product after sale. (Note that this concept is different from the internal short circuit caused by long-term lithium dendrite in general academic knowledge).

Therefore, the insulation test of lithium-ion battery cells should check the "distance between electrodes”, but not measure the resistance. From the air breakdown voltage v.s. distance data (Figure 2), we can see that, even if the gap distance is less than 1um, the test voltage must be above 350V to achieve the effective detection of a discharge phenomenon after air breakdown. However, due to the lack of relevant technical information, most manufacturers believe that as long as the product does not show an internal short circuit, it will be enough. Consequently, only low voltage is applied during testing, which makes it impossible to effectively judge whether the insulation distance is sufficient or not.

Figure1. Thickness changes of grahite anode material during charging and
discharging of a lithium-ion battery (Furukawa Electric Review, No. 134 2015-1) 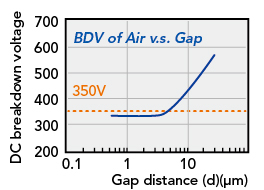 Moreover, even if sufficient voltage is applied, some burrs will produce intermittent short-term insulation breakdowns during the test, but this phenomenon will seem to be recovered due to burr shrink. At the same time, the separator instantly breaks down and becomes a molten hole. The insulation layer lacks the protection of the separator and causes the burrs to be exposed. After several times of charging and discharging, the inflation of the negative electrode material will cause a short circuit between the negative electrode material and the burr, which will eventually lead to serious disasters. A general WV/IR test cannot detect such abnormal products only by checking the leakage current at a specific time (Figure 3). Flashover detection during the test and leakage current determination test time measuring are the most complete test methods.

Chroma 11210 Battery Cell Insulation Tester is specially designed for the detection of abnormal insulation of lithium-ion battery cells. It detects and analyzes partial discharges or flashovers in the insulator during high voltage test. This function helps lithium-ion batteries (dry cells) to measure whether the effective insulation distance is sufficient before an electrolyte injection, so as to prevent potential defective products from entering the next stage of production or even the end market. Compared with a traditional insulation test, the Chroma 11210 Battery Cell Insulation Tester brings the safety of electronic and electrical products driven by lithium-ion batteries to a new level.